On an extraordinary day in America, people of all colors and ages waited for hours yesterday in freezing temperatures to witness the moment a young black man took command of a nation founded by slave owners. This was a scene watched in fascination by millions — maybe billions — of people around the world. Before a crowd of more than a million, Barack Hussein Obama claimed his place in history as America’s first black president, summoning a dispirited nation to unite in hope against the “gathering clouds and raging storms” of war and economic woe. The presidency passed to Democrat Obama from Republican George W. Bush at noon, thus marking one of democracy’s greatest attributes: the peaceful transfer of power.

“What is required of us now is a new era of responsibility — a recognition, on the part of every American, that we have duties to ourselves, our nation, and the world, duties that we do not grudgingly accept but rather seize gladly,” 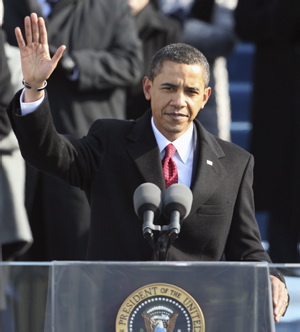