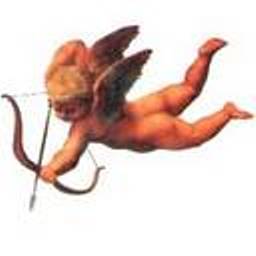 Eros would make as much mischief as he possibly could by wounding the hearts of all, but according to one story he falls in love himself. This story goes that Eros was always at his mother’s side assisting her in all her conniving and godly affairs.

One time she became jealous of a human woman named Psyche so she asked Eros to shoot Psyche in the heart with an arrow to make her fall in love with the most hideous creature around. When Eros  goes to complete the task he gets pricked with his own gold arrow and falls in love with her. Because she was a human and he was a god he had to keep his identify a secret. He would visit her nightly but she had to keep her light out to conceal his identity. One night curiosity took Psyche over and she lit a lantern while Eros slept. He awoke and ran out with anger. Thus Psyche roamed the earth looking for her love. Zeus felt sorry for them and reunited them and they wed. There are many variations to this story, most have the same outcome.

The Romans are accredited with the name Cupid. In the Renaissance, artists starting painting Cupid like infant angels they called Putti. By then the whole handsome image was gone. When people started sending valentine day cards back in the 1700’s the baby Cupid image stuck. Cupid is still represented that way today, over the years he has represented how unpredictable love can be, for example you may have seen cupid with a blindfold, hence love is blind.

So watch out on February 14th,  Cupid will be spreading his love and mischief around.