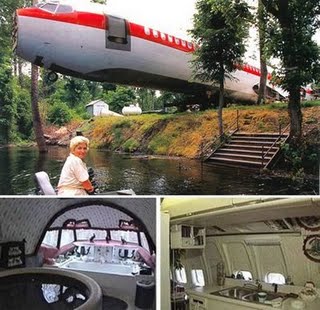 When a tree flattened her home in 1994, JoAnn Ussery began her search for new a new home. In fact, the 52-year old Benoit, Mississippi, hairdresser decided she wanted to live in a mobile home. But when her brother-in-law suggested customizing a retired jetliner, JoAnn had an epiphany. "I didn't sleep a wink that night," she said. "When he said it, I knew it was perfect." Things began to take-off from there.

Her brother-in-law, an air-traffic controller at Memphis Airport, invited JoAnn to the plane moratorium the very next day. She found her new home that same day,  a 1968 Commercial Airlines Boeing 727. The plane didn't look like much when she found it, she says, "but I knew I could make it a home." Of course, she couldn't just drive a 127-ft plane off the lot. After several months of clearing red tape, a moving company transported the plane the 70 miles to her property on Whittington Lake.

For JoAnn, her desire to live in a plane didn't feel strange. She became a regular at the plane cemetery where the workers let her salvage parts and came to know her as "that gutsy little grandma." With the help of two engineers, the on-site customizations took six months and cost close to $30,000. The jet was renovated to a  three bedroom, one-and-a-half bath perched over a lake in rural Mississippi.

The plane's dimensions were, 12 ft wide by 127 ft long , so JoAnn had to be very creative. She turned the cockpit into a Jacuzzi bath, with windows overlooking the water, and continued to use one of the original lavatories as a working half-bath. Some of the plane's amenities proved to be convenient. "I didn't even need curtains," she said. "It's a plane; so every single window had its own!"

This unusual home of course had the taxman chasing its tail!  "The first year I paid $1 in taxes," she said. "They didn't know what to charge for living in a plane." JoAnn has been on 28 TV shows in 5 countries. Her most memorable being the Late Show on CBS. "(Host David) Letterman was the funniest person I ever met."

If you would like to get loan information from recommended banks, or get started and view all homes, condos, investment properties, pre-foreclosures, bank owned foreclosures (REO's) or thinking of selling your property. Please feel free to contact me today for free counseling at (619) 301-0200 visit our website, click CountyProperties.net