A little history about Easter 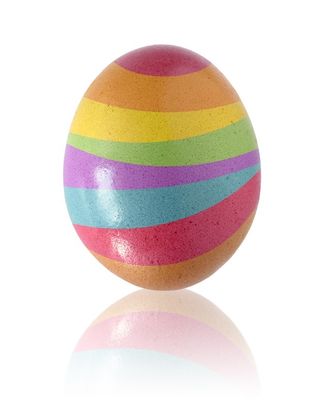 A little history about Easter:

Easter, which celebrates Jesus Christ's resurrection from the dead, is Christianity's most important holiday. It has been called a moveable feast because it doesn't fall on a set date every year, as most holidays do. Instead, Christian churches in the West celebrate Easter on the first Sunday following the full moon after the vernal equinox on March 21. Therefore, Easter is observed anywhere between March 22 and April 25 every year. Orthodox Christians use the Julian calendar to calculate when Easter will occur and typically celebrate the holiday a week or two after the Western churches, which follow the Gregorian calendar.

The exact origins of this religious feast day's name are unknown. Some sources claim the word Easter is derived from Eostre, a Teutonic goddess of spring and fertility. Other accounts trace Easter to the Latin term hebdomada alba, or white week, an ancient reference to Easter week and the white clothing donned by people who were baptized during that time. Through a translation error, the term later appeared as esostarum in Old High German, which eventually became Easter in English. In Spanish, Easter is known as Pascua; in French, Paques. These words are derived from the Greek and Latin Pascha or Pasch, for Passover. Jesus' crucifixion and resurrection occurred after he went to Jerusalem to celebrate Passover (or Pesach in Hebrew), the Jewish festival commemorating the ancient Israelites' exodus from slavery in Egypt. Pascha eventually came to mean Easter.

Easter is really an entire season of the Christian church year, as opposed to a single-day observance. Lent, the 40-day period leading up to Easter Sunday, is a time of reflection and penance and represents the 40 days that Jesus spent alone in the wilderness before starting his ministry, a time in which Christians believe he survived various temptations by the devil. The day before Lent, known as Fat Tuesday, is a last hurrah of food and fun before the fasting begins. The week preceding Easter is called Holy Week and includes Maundy Thursday, which commemorates Jesus' last supper with his disciples; Good Friday, which honors the day of his crucifixion; and Holy Saturday, which focuses on the transition between the crucifixion and resurrection. The 50-day period following Easter Sunday is called Eastertide and includes a celebration of Jesus' ascension into heaven.

In addition to Easter's religious significance, it also has a commercial side, as evidenced by the mounds of jelly beans and marshmallow chicks that appear in stores each spring. As with Christmas, over the centuries various folk customs and pagan traditions, including Easter eggs, bunnies, baskets and candy, have become a standard part of this holy holiday.

You won’t find them in the Bible, but many cherished Easter traditions—from the Easter bunny to decorating and hunting for eggs—have been around for centuries. Where did these prevalent holiday symbols come from?

The Bible makes no mention of a long-eared, short-tailed creature who delivers decorated eggs to well-behaved children on Easter Sunday; nevertheless, the Easter bunny has become a prominent symbol of Christianity's most important holiday. The exact origins of this mythical mammal are unclear, but rabbits, known to be prolific procreators, are an ancient symbol of fertility and new life. According to some sources, the Easter bunny first arrived in America in the 1700s with German immigrants who settled in Pennsylvania and transported their tradition of an egg-laying hare called "Osterhase" or "Oschter Haws." Their children made nests in which this creature could lay its colored eggs. Eventually, the custom spread across the U.S. and the fabled rabbit's Easter morning deliveries expanded to include chocolate and other types of candy and gifts, while decorated baskets replaced nests. Additionally, children often left out carrots for the bunny in case he got hungry from all his hopping.

Easter is a religious holiday, but some of its customs, such as Easter eggs, are likely linked to pagan traditions. The egg, an ancient symbol of new life, has been associated with pagan festivals celebrating spring. From a Christian perspective, Easter eggs are said to represent Jesus' emergence from the tomb and resurrection. Decorating eggs for Easter is a tradition that dates back to at least the 13th century, according to some sources. One explanation for this custom is that eggs were formerly a forbidden food during the Lenten season, so people would paint and decorate them to mark the end of the period of penance and fasting, then eat them on Easter as a celebration.

Easter egg hunts and egg rolling are two popular egg-related traditions. In the U.S., the White House Easter Egg Roll, a race in which children push decorated, hard-boiled eggs across the White House lawn, is an annual event held the Monday after Easter. The first official White House egg roll occurred in 1878, when Rutherford B. Hayes was president. The event has no religious significance, although some people have considered egg rolling symbolic of the stone blocking Jesus' tomb being rolled away, leading to his resurrection.

Easter is the second best-selling candy holiday in America, after Halloween. Among the most popular sweet treats associated with this day are chocolate eggs, which date back to early 19th century Europe. Eggs have long been associated with Easter as a symbol of new life and Jesus' resurrection. Another egg-shaped candy, the jelly bean, became associated with Easter in the 1930s (although the jelly bean's origins reportedly date all the way back to a Biblical-era concoction called a Turkish Delight). According to the National Confectioners Association, over 16 billion jelly beans are made in the U.S. each year for Easter, enough to fill a giant egg measuring 89 feet high and 60 feet wide. For the past decade, the top-selling non-chocolate Easter candy has been the marshmallow Peep, a sugary, pastel-colored confection. Bethlehem, Pennsylvania-based candy manufacturer Just Born (founded by Russian immigrant Sam Born in 1923) began selling Peeps in the 1950s. The original Peeps were handmade, marshmallow-flavored yellow chicks, but other shapes and flavors were later introduced, including chocolate mousse bunnies.

In New York City, the Easter Parade tradition dates back to the mid-1800s, when the upper crust of society would attend Easter services at various Fifth Avenue churches then stroll outside afterward, showing off their new spring outfits and hats. Average citizens started showing up along Fifth Avenue to check out the action. The tradition reached its peak by the mid-20th century, and in 1948, the popular film Easter Parade was released, starring Fred Astaire and Judy Garland and featuring the music of Irving Berlin. The title song includes the lyrics: "In your Easter bonnet, with all the frills upon it/You'll be the grandest lady in the Easter parade."

The Easter Parade tradition lives on in Manhattan, with Fifth Avenue from 49th Street to 57th Street being shut down during the day to traffic. Participants often sport elaborately decorated bonnets and hats. The event has no religious significance, but sources note that Easter processions have been a part of Christianity since its earliest days. Today, other cities across America also have their own parades.